Two of our favourite Manchester institutions – Peter Barlow’s Cigarette and Carcanet Press – are teaming up to present an afternoon of alternative poetries with a summer special in the Northern Quarter welcoming two Carcanet poets Jay Gao and Jee Leong Koh, among others to be announced.

Two of our favourite Manchester institutions – Peter Barlow’s Cigarette and Carcanet Press – are teaming up to present an afternoon of alternative poetries.

Jay Gao is a poet, fiction writer and Contributing Editor at The White Review, and his writing has appeared in Granta, The Guardian, The Poetry Review and 3:AM Magazine. Originally from Edinburgh, he now lives in the States, where he earned his MFA at Brown University and is an incoming PhD student at Columbia University in New York City. His debut poetry collection Imperium is just out with Carcanet Press and he is the author of three poetry pamphlets: Wedding Beasts (2019), shortlisted for the Saltire-Calum MacDonald Award, Katabasis (2020), a winner of a New Poets Prize, and TRAVESTY58, just out. More on Jay Gao’s launch event for Imperium here.

Jee Leong Koh is the author of two Carcanet collections: Inspector Inspector, just out, and Steep Tea, named a Best Book of the Year by the Financial Times and a finalist by Lambda Literary. He has published four other books of poetry, a volume of essays, a collection of zuihitsu, and a hybrid work of fiction. Originally from Singapore, he lives in New York City, where he heads the literary non-profit Singapore Unbound and the independent press Gaudy Boy. More on Jee Leong Koh’s launch event for Inspector Inspector here.

The event will be livestreamed – book a ticket and a Zoom link will be sent out in the lead-up to the event. 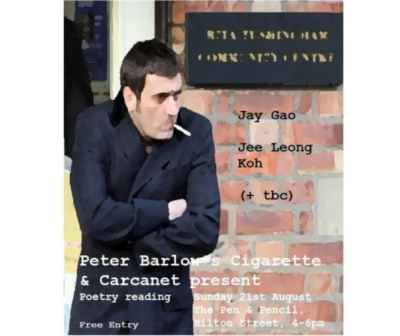