By Anne-Marie Pattenden: From the 7th to the 13th of March, Cottonopolis hosts the Diablesse Rum International Women’s Day 2022 exhibition. This showcases Manchester’s women in hospitality and is complemented by a cocktail menu designed to highlight the gender pay gap.

Designed with the help of the women of Cottonopolis, each carefully crafted drink allows you to donate 20% of the price directly to the Young Women’s Trust, a charity that supports women aged 16-30 struggling to live on low or no pay.

Cleo Farman, managing director of Diablesse, is fiercely proud to have started the UK’s first wholly female-owned rum brand. Passionate about all things rum, she was positively bubbling over with enthusiasm at the launch event, which paired the cocktail menu with a selection of sushi canapés and a tasting table that allowed guests to try each of Diablesse’s signature rums. To these tastebuds, the highlight was the clementine spiced rum which smells heavenly and tastes like Christmas in a bottle – no surprise as it’s a demerara rum flavoured with clementine zest, cinnamon, pimento pepper, vanilla pod and cloves.

Diablesse is named after an infamous cloven-hooved character in Caribbean folklore, who roams the Caribbean after moonlight. In an exclusive interview, Cleo recalled how she started the company after fifteen years of owning Manchester bars such as Odd, Odder and Oddest. “One day I just woke up and I thought, ‘What am I doing?’ I love rum, I’ve always loved rum and right then I decided to sit down and start.”

“I pecked the heads of everyone that I knew. There’s a fantastic place in Liverpool that helped me, they supply rum, and I just started blending at home.” Regarding the process of blending countless variations of her original Caribbean Golden rum before sending it out to restaurants, bars and chefs to try, she says: “It just took ages. And every time I thought I’d got it right, they’d come back and say no!” In the end, she settled on a blend of Baijan, Guyanese and Jamaican rum, resulting in a ‘sipping rum’ with notes of apricot, mango and chocolate.

“Like with gin a decade ago, there’s now a place for artisanal rum. Everything in my rum is natural, there’s nothing artificial in it.” 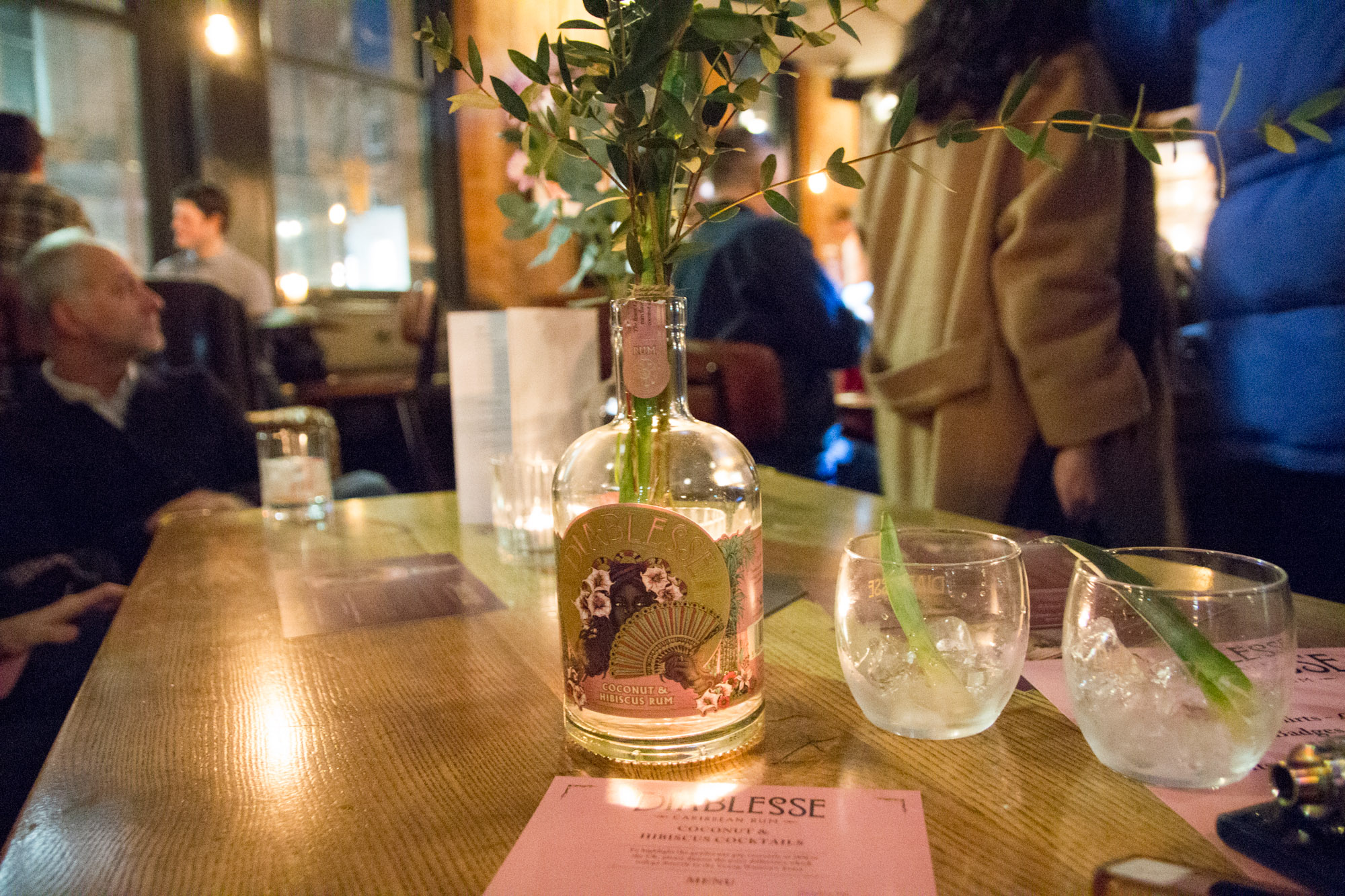 All cocktails on the special menu are made with Diablesse’s newest release, the coconut and hibiscus rum. It’s made with Guyanese demerara rum and has a natural pink hue thanks to its hibiscus flower and fresh coconut flavourings. And unlike other coconut rums, it has a deliciously dry, rounded finish. “I’ve got quite a dry palate. I don’t like really sweet things,” Cleo explained. “We’ve gone through so many hibiscus distillates. Hibiscus on its own is quite bitter and quite dry, so you’ve got to be careful – it’s taken me a long time to get the flavour, to balance that out.”

First, the Rose Quartz cocktail, which expertly marries the coconut and hibiscus Diablesse with Franklin’s pineapple and almond mixer. This was a light, refreshing drink, garnished with an aloe leaf, and arguably the most moreish serve of the evening. The Caribbean Lei is a violet tinged potion with a complex and surprising flavour. This comes from the inclusion of Falernum liqueur; a Caribbean favourite with notes of ginger, lime, clove and almond.

“Everything in my rum is natural, there’s nothing artificial in it.”

Read My Lips is named after the famous Caribbean pirate, Mary Read. It’s beautifully decorated with pink-dyed gypsophila flowers and combines coconut and hibiscus Diablesse with its original Caribbean Golden Rum and tropical fruit flavours. As it contains both pineapple and cherry, you’d expect it to be super sweet but it proves to be a much more sophisticated sip.

Make your way to the beautifully-lit Cottonopolis to enjoy all the above while showing your support for International Women’s Day. And by paying the optional 20% donation, you can actually put your money where your mouth is.

Want more?
Get it in your
inbox
Load more
Exhibitions Until 30 June 2022, FREE