Sprout Bhaji Butty. Have you ever seen one? Ever heard of one? Just imagine what that might look like. How it might taste. How it might feel in your hands as you move it northbound towards your head. The vegan brioche is split in two by a warm sprout, broccoli and onion bhaji patty, spiced generously with fennel and chilli, crisped up with salad and seductively softened with cranberry chutney. This isn’t just a standard butty, it’s an experience. A holiday season high only available for a limited time. A Christmas special at Bundobust.

Bundobust, or Bundy B’s as I’ve started calling it, is already a Manchester success and the well-established site just off Piccadilly Gardens pumps out peak flavours to munching punters seven days a week. It’s found a welcome home in Liverpool too and there’s still an HQ site in Leeds, where the vegetarian and vegan Gujarati street food phenomenon was created back in 2014. This year, much to the delight of Manchester-based fanatics, Marko Husak and Mayur Patel opened a Brewery in the city…

It’s an impressive space, with a huge atrium illuminating the big row of beer tanks that line the restaurant

Bundobust Brewery, or Bundy B’s Brilliant Beer Barn as I’ve started calling it, is a two-minute stroll from St Peter’s Square on Oxford Street, right in the sweet spot between the business charmers, concert-goers and wandering students on the lookout for crisps. It’s an impressive space, with a huge atrium illuminating the big row of beer tanks that line the restaurant; beer tanks that produce modern beer with the food menu in mind. Specials aside, this is a must-visit new restaurant in the city. 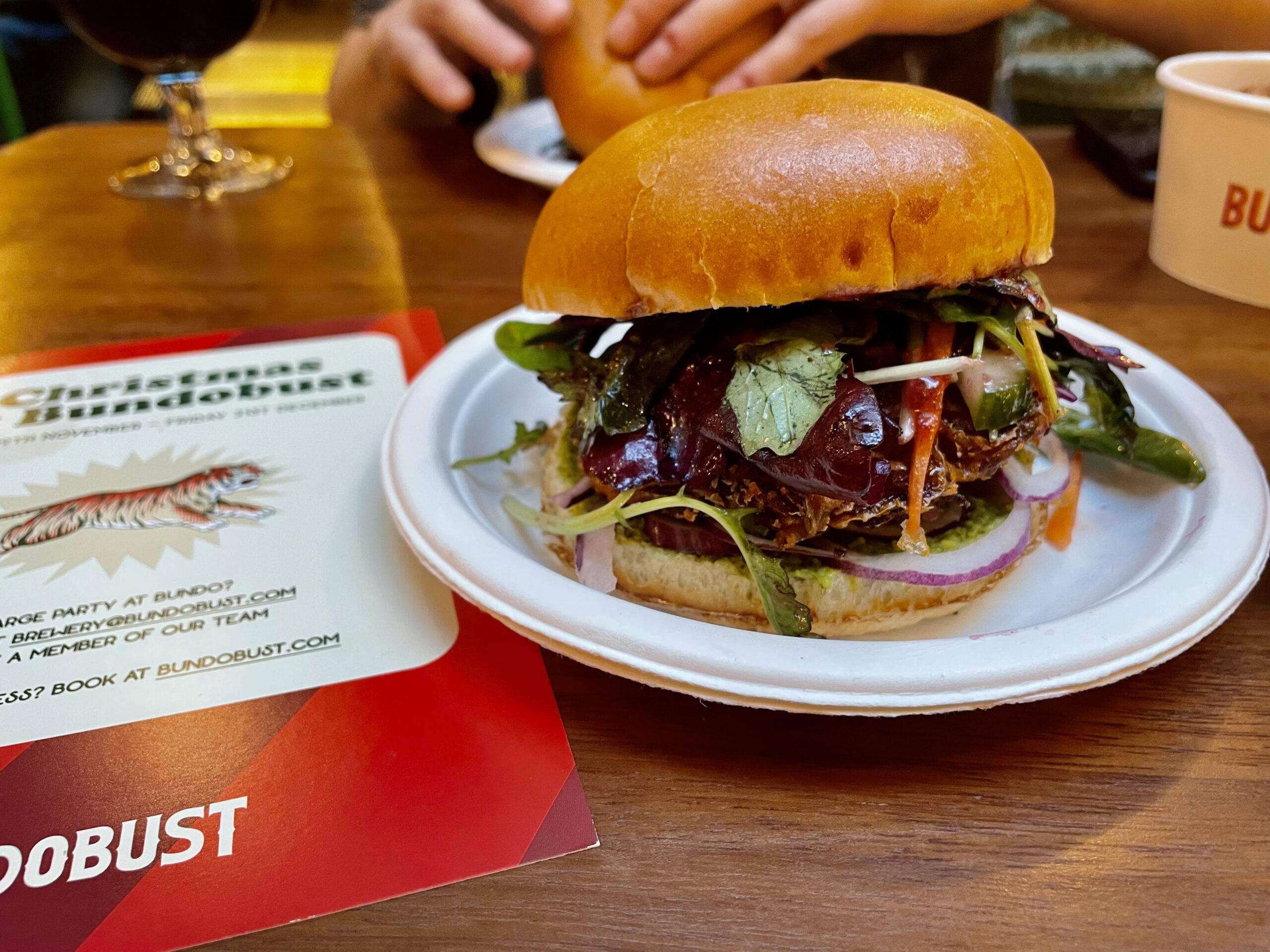 This December, Bundobust has developed a Christmas special menu with Gujarati winners from start to finish; a truly “one of each please” menu. The great thing about smallish-plates is the fact you can actually order a number of items and worry less about the waiter’s opinion of you and your snapping River Island belt.

A tub of three Sprout Bhajis is a great place to kick-off, the dollops of wonder combining the classic bhaji scent and texture with the softly bitter taste of sprout. There’s a Festive Curry too, utilising winter veggies including parsnips, French beans and swede, cooked in a warming tomato and coconut sauce. The cinnamon, star anise and curry leaves give it cosy warmth. Indeed, a mouthful of this Festive Curry alongside some jeera rice fills your entire body with glowing happiness.

There’s a Christmas Kulfi for sweet teeth; Indian ice cream featuring nutmeg, cinnamon and orange peel. This tasty treat comes on a stick and it’s exactly the kind of thing I imagine Santa would gorge upon at the back of his sleigh. There’s a selection of festive Party Drinks to accompany the Christmas Specials and time is ticking if you want a party… this is a limited-edition menu, so get down before Santa and/or Boris puts a stop to it.

Food and Drink in Lancashire

Our guide to food and drink in Lancashire, featuring restaurants and bars in Lancaster, Morecambe, Blackburn, Burnley and Blackpool.

Food and drink delivery in Chester

Some of the best food and drink delivery choices in Chester. Here are the very best produce, alcoholic drinks and semi-prepped meals in the city available for delivery and sometimes collection.

Food and drink delivery in York

Some of the best food and drink delivery choices in York. Here are the very best produce, alcoholic drinks and semi-prepped meals in the city available for delivery and sometimes collection.

Want more?
Get it in your
inbox
Load more
Connect
with us on
Facebook
Music Until 16 February 2023, from £9.50