We Are Carnival! Party at Central Library

Head to Central Library on 27 October for an afternoon of spoken word, workshops, music, film and food inspired by 50 years of the Manchester Caribbean Carnival.

Now a top highlight in the city’s annual calendar, the Caribbean Carnival was born out of an impromptu event on the streets of Moss Side in 1971, organised by a group of locals – mostly of Saint Kitts & Nevis and Trinidadian origin – and attended by around 100 people. Every year since, traditional mas bands, dance troupes and floats have formed a parade that snakes through Moss Side and neighbouring Hulme on the Saturday of Carnival weekend. The procession ends up in Alexandra Park for a party of community events, serious sound systems and incredible food. 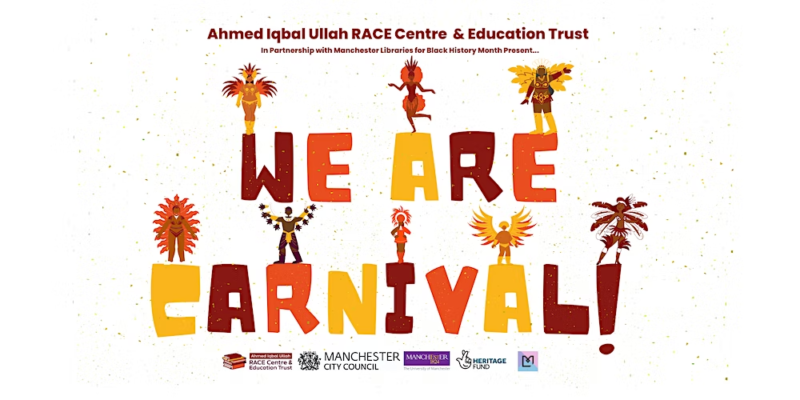 We Are Carnival! Party is a chance to explore historical carnival memories through archives, live performances and community activities, soundtracked by a DJ set from Manchester Caribbean Carnival affiliate Kemoy Walker. First up at 2pm, there’ll be a family-friendly carnival crown-making workshop led by Tina Ramos Ekongo. At 4pm it’s a screening the 1970s BBC documentary A Tale of Black Families, presented in partnership with North West Film Archive at Manchester Metropolitan University.

At 4.30pm there’ll be a live performance from Kemoy Walker and an MC, before spoken word performances from members of Manchester-based literature and performance arts charity, Young Identity.

The event is part of the Ahmed Iqbal Ullah RACE Centre and Education Trust’s We Are Carnival! – a series of free events for Black History Month to mark the city’s celebrations of 50 years of Manchester’s Caribbean Carnival.

We Are Carnival! Party at Manchester Central Library, Manchester