A Summer of The Untold Orchestra

A Summer of The Untold Orchestra at Escape to Freight Island, Manchester, 2 June–1 August 2021, from £16 - Book now

This Summer, The Untold Orchestra are packing six of their renowned ‘icon’ shows into eight dates at Escape to Freight Island. Including orchestral renditions of Stevie Wonder, David Bowie and Disney classics, there’s a slice of musical joy for everyone in the family.

Comprising some of the UK’s finest classical, pop and jazz musicians, The Untold Orchestra formed just over two years ago. In that short time, they’ve worked on recording projects with the likes of Grammy Award winner Bill Laurance (Snarky Puppy), performed at Manchester International Festival with rapper Skittles, and sold out multiple shows including Nina: An Orchestral Rendition​ and 50 Years of Abbey Road: An Orchestral Rendition.

After being forced to cancel most of their performances over the past year, the orchestra are raring to get back on stage, and pending the relaxation of COVID-19 restrictions, Escape To Freight Island are making sure that as many people as possible can watch them perform live this summer. Here is the full list of shows on offer:

Both the orchestra and Freight Island have been working hard to prioritise the safety of patrons, players and staff, while also aiming for the closest thing possible to a ‘normal’ gig experience.

After a year without  live music, these shows are something special to look forward to. Head over to the Escape to Freight Island website and book your tables now – they’re going fast. 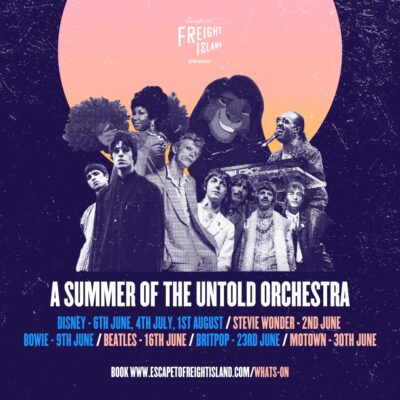 A Summer of The Untold Orchestra at Escape to Freight Island, Manchester