Everyone in Manchester who loves food knows about Salvi’s. This family-run business, is famed not only for opening the city’s first Neopolitan restaurant and deli but also for serving up some of the finest and most authentic Italian food around.

We reviewed the exceptional Corn Exchange branch a few years ago, long before the word covid took the Google Trends tool by storm. Since then, they’ve turned into a force to be reckoned with, and have quite rightly been wooed up by the people behind the megabucks Deansgate Square complex, a short walk from the train station. This massive district is set to dramatically expand the city centre over the coming years, hosting everything from luxury flats, restaurants, bars and enough amenities to warrant it being an all-in-one high-end town in itself.

And of course, they’re looking to showcase Manchester’s best restaurant. Enter Salvi’s. Lookswise, this stunning restaurant doesn’t disappoint, with stately high ceiling, bright, well-lit dining spaces and of course, the cute little Salvi’s mini-car outside. The staff have a confident swagger to go alongside their easy charm, well aware that they’re putting out the best Italian food for miles around (excluding the two other Salvi’s restaurants, naturally).

They’re right to think that. Over the past decade or two, the city, and indeed the North-West, has suffered from a lot of underachieving Italian restaurants, content to ply the same old dishes without taking any risks. Salvi’s, on the other hand, teams innovation with tradition. 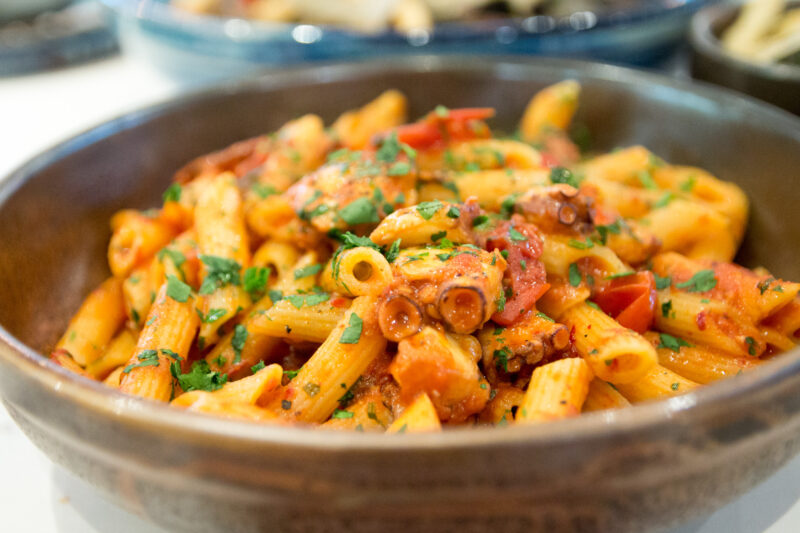 You’ll find your favourite Italian classics, such as pasta, pizza, gnocchi, and so on, but the quality is off the scale. Practically everything is imported from Italy, the bread is cooked on-site and overall there’s a sense of pride that you simply won’t find anywhere else. Ask a waiter to come up with a drink according to your tastes and you’re guaranteed something special.

Start with the focaccia, described to us as Salvi’s signature dish. The bread base is hot and soft, like the very best pizza dough, and it comes topped with fresh-that-day rocket, cherry tomatoes and gleaming-white soft Stracciatella cheese. (Side-note: stracciatella translates as ‘little rags’, to show how the cheese rips apart so beautifully. It’s a touch more evocative than, say, ‘meat pie’.) 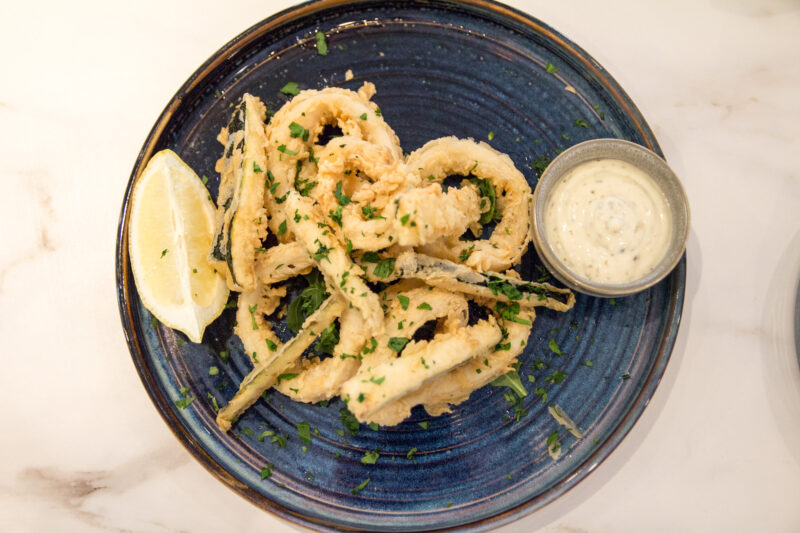 The pasta polipo ‘nduja is a hearty bowl of fresh pasta, tangled up with chunks of octopus and spicy ‘nduja sausage, while the must-try guazetto Napoletano is described as a ‘mixed seafood stew in tomatoes’ but offers so much more. It’s a huge bowl of clams, calamari, octopus and other assorted freshly-caught and freshly-cooked seafood, swimming in a deeply intense tomato-based sauce.

The deep-fried calamari is another winner, but the star of the show, and the one dish I’ve already made plans to go back for, is the montanara, a mini deep-fried pizza smothered with homemade pesto, mozzarella and pine nuts. It’s simple but wonderful. It even looks great, with the dough blown up like a bread balloon, perfect to rip pieces off to use to scoop up the pesto. We’d recommend most things on the menu, but this is a Hall Of Fame-er.

The brains behind Deansgate Square aren’t stupid. In order to establish this area as one of Manchester’s future top spaces, they need the city’s most beloved culinary minds and with Salvi’s, they’ve chosen the best. Quite simply the best Italian experience in Manchester.

Connect
with us on
Facebook
Activity Until 31 December 2022, from £9