Higher Ground seems to have appeared from nowhere to become one of the leading forces in the Manchester food scene. Fresh from a brief stint at the excellent-but-near-impossible-to-find Kampus, via a stunning meal at the launch of now semi-cancelled Manchester Food and Drink Festival 2020 (though it’s back in full force next April, if everything goes well), now they’ve found a potential forever home at the excellent Ducie Street Warehouse. On Friday and Saturday evenings throughout October, November and December (first sitting at 5.30 pm, second at 8 pm).

A journey through seasonal, locally-sourced produce

But, of course, quality like this doesn’t appear out of the blue. They have strong links to the peerless Where The Light Gets In Head, most notably with its former head chef Joseph Otway in charge of the kitchen, and that’s the kind of experience this is, albeit tweaked for a city centre audience, not a million miles from the likes of Erst. It’s a journey through seasonal, locally-sourced produce, put together in a way that seems familiar but elevated to new heights. 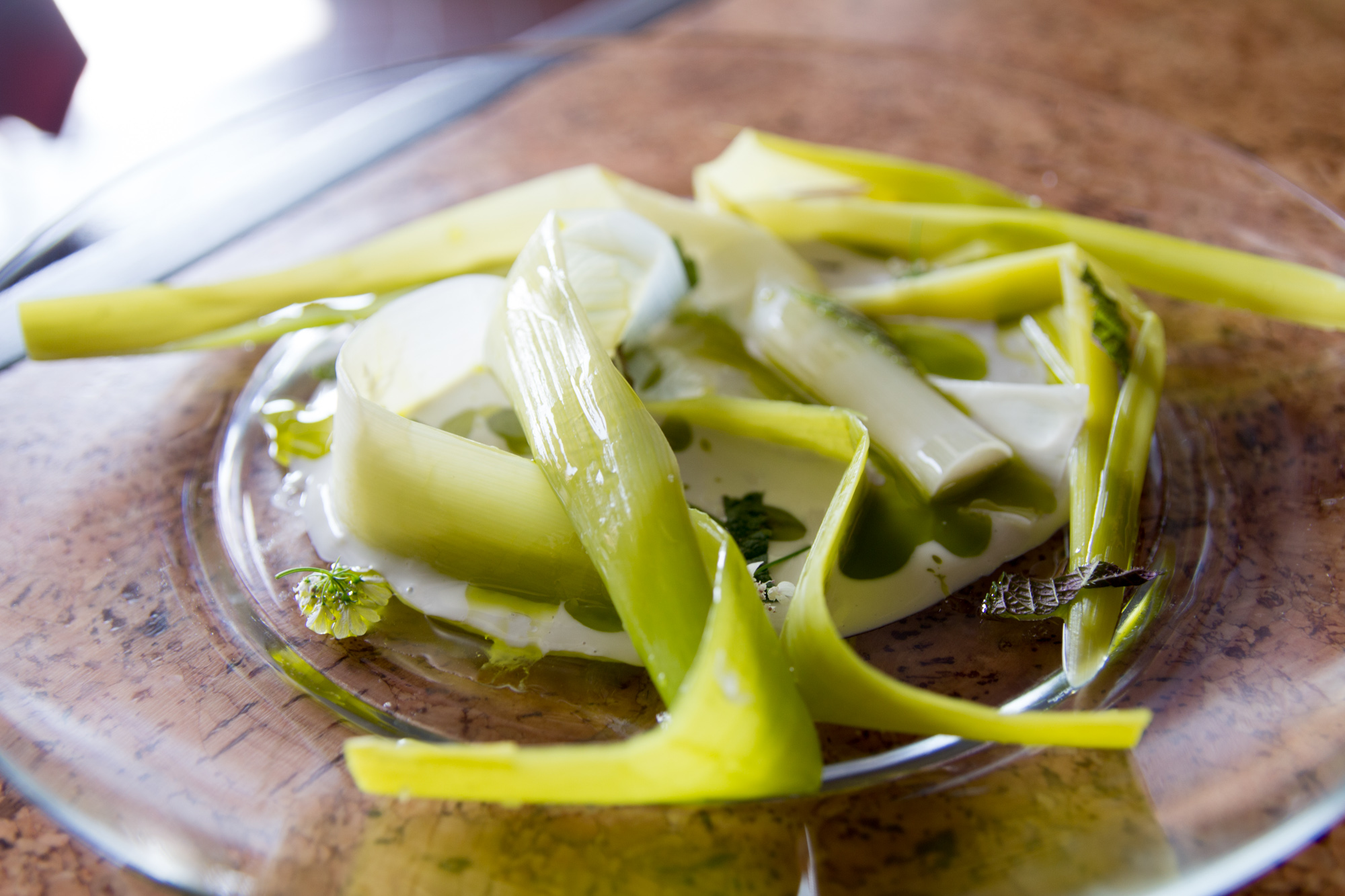 It’s located towards the rear of the glorious Ducie Street Warehouse, away from the laptop-clicking workers looking for a semi-office feel, in a spacious, elegant room blessed with plenty of natural light. It’s hard to think of a front-of-house team quite as skilled and likeable as Higher Ground – they know their onions, undeniably so, but there’s no pomp or prissiness, more like a close friend delighted to paint a picture about a new meal they’ve created. 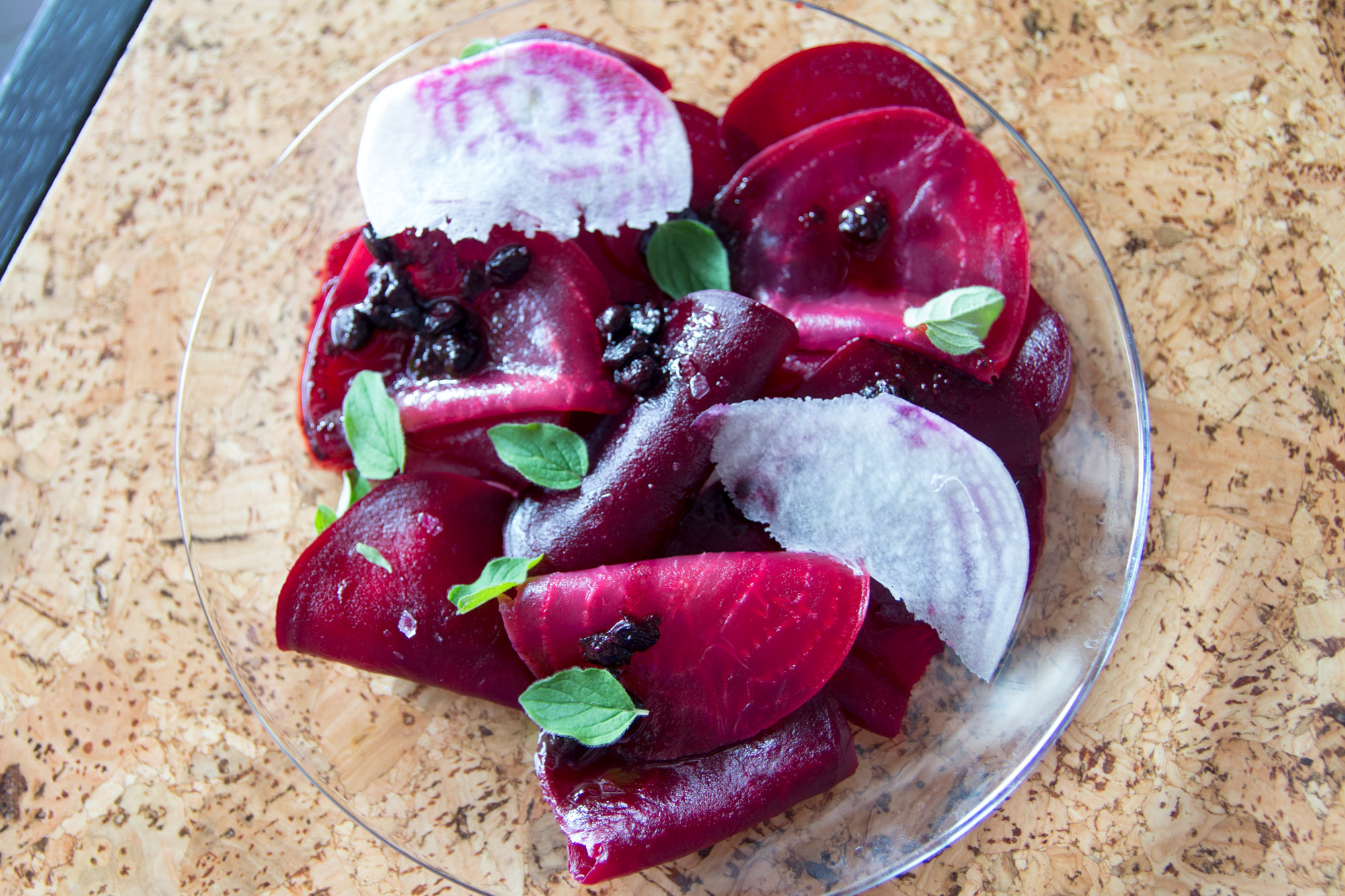 We begin with a small plate of soft leeks on a pale oyster sauce infused with perilla (edible leaves with a light aniseed taste). This was on the menu at CT’s first visit to Higher Ground back in March (and my final meal out, just before lockdown 1.0 kicked in), it was great then, it’s great now and indicates what to expect from the team: non-fussy but always-unique flavour combinations.

Next, Dennis’s beetroot, dotted with salted blueberry, marjoram and goat curd. Apparently, Dennis had a plot at the allotment and these are his beetroot – though Dennis has fallen off the map, which leads to two puzzling questions: have they stolen poor Dennis’s beetroot, and what happens when they use it all up? Best not to think too hard about it, just book a table soon and snap it up. Now, I’m not the world’s biggest beetroot fan, but when these thin slices combine with the mini blobs of goat curd it transforms into something that very much works. 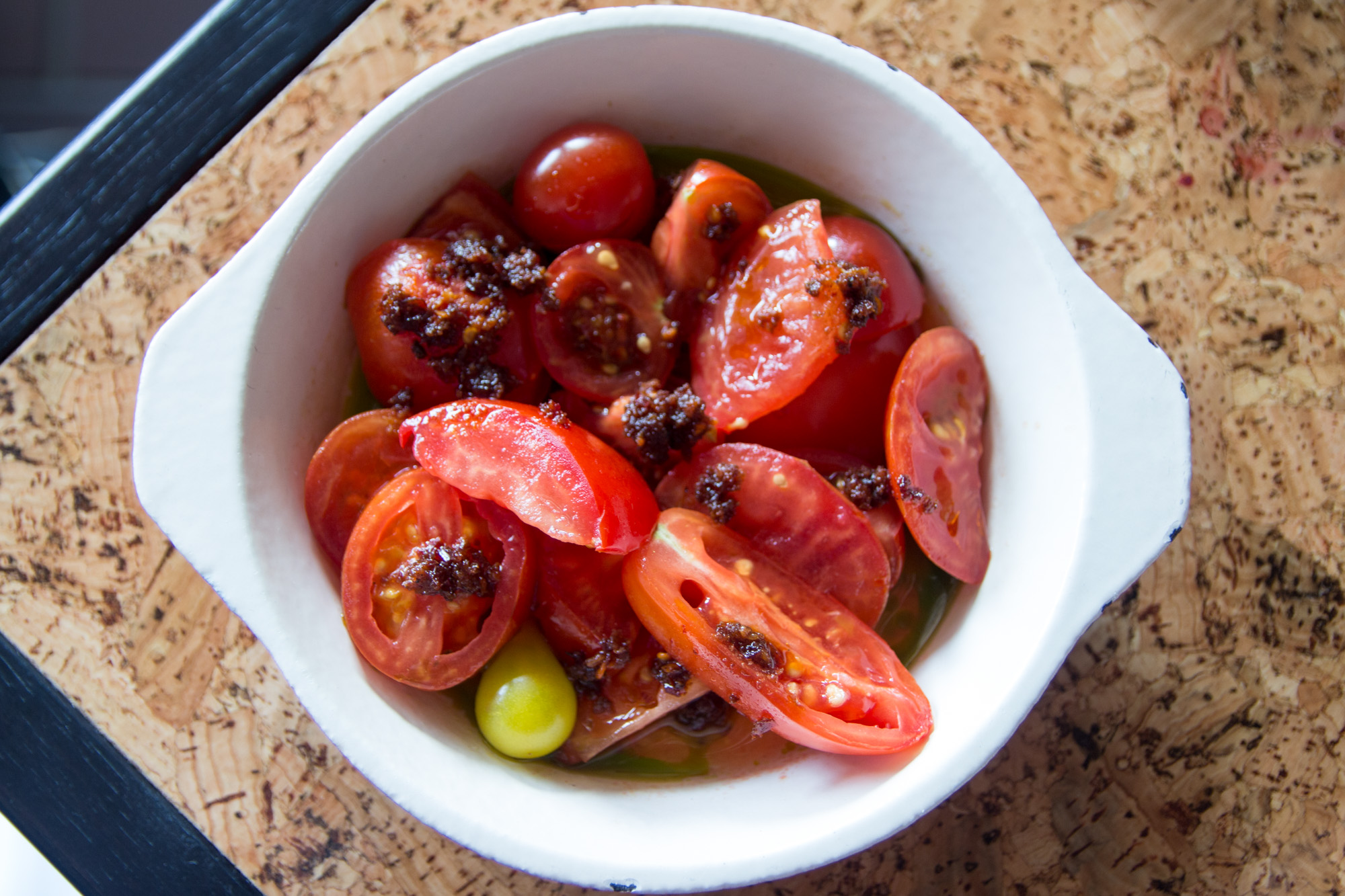 The third small plate consists of rainbow carrots, sea buckthorn hot sauce, marigold leaves and rye crumb. It’s a beautiful autumnal dish, all orange, purples and dashes of green, rich in sweetness but with a slow-burn heat and a multitude of textures. It’s a wonderful, must-try dish, one of the year’s best. 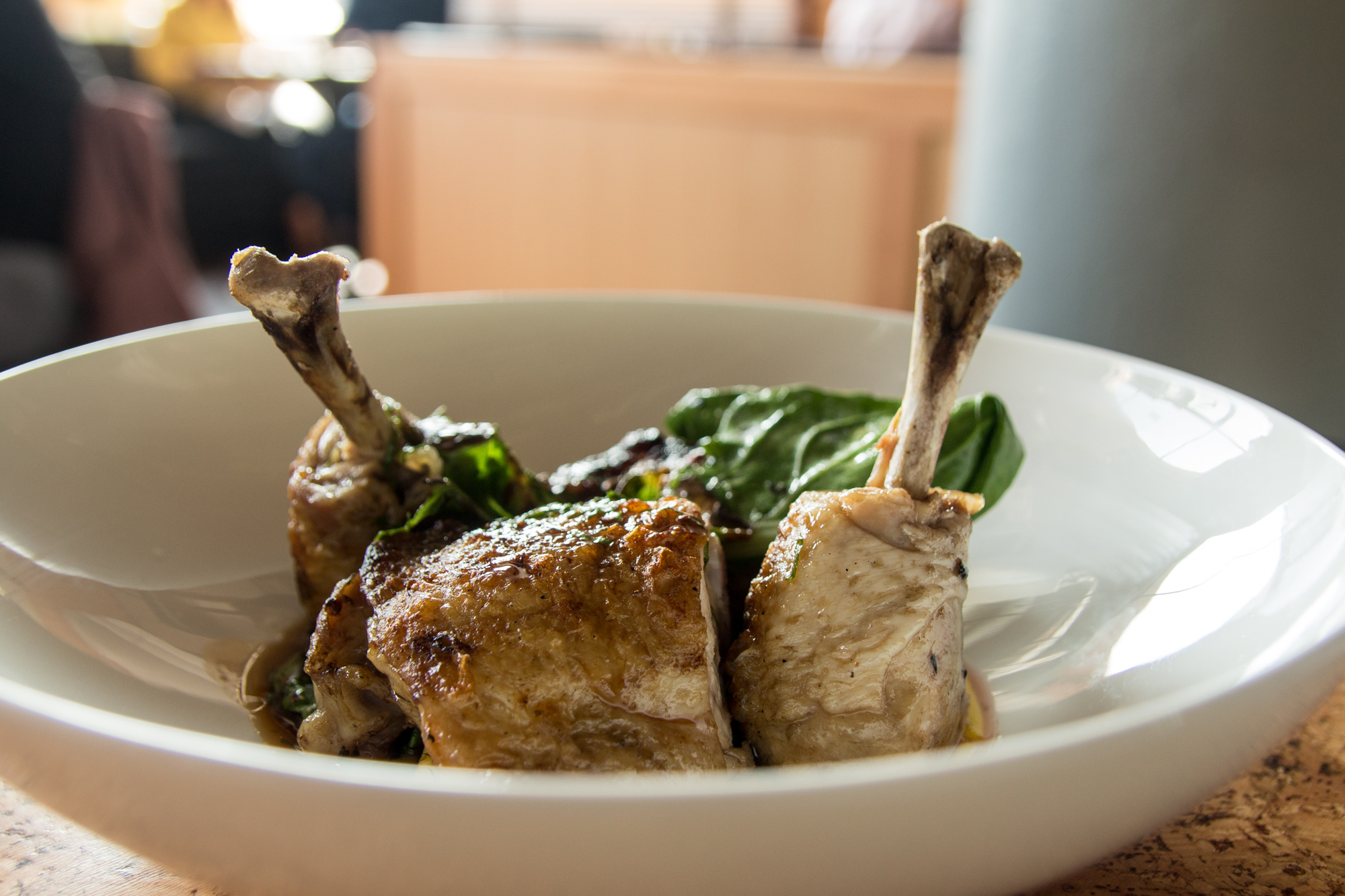 Then, a bowl of fresh tomatoes, in a light salty oil, mingled in with the curiously-titled ‘Curing Rebels Do-Ya?’. Rather than a long-lost glam rock song, it’s a play on ‘Nduja’, little lumps of spreadable salami but rather than coming from Calabria, these are made by Brighton-based meat experts Curing Rebels. It’s a delicious course, the potent meat pairing well with the fresh, bright tomatoes. 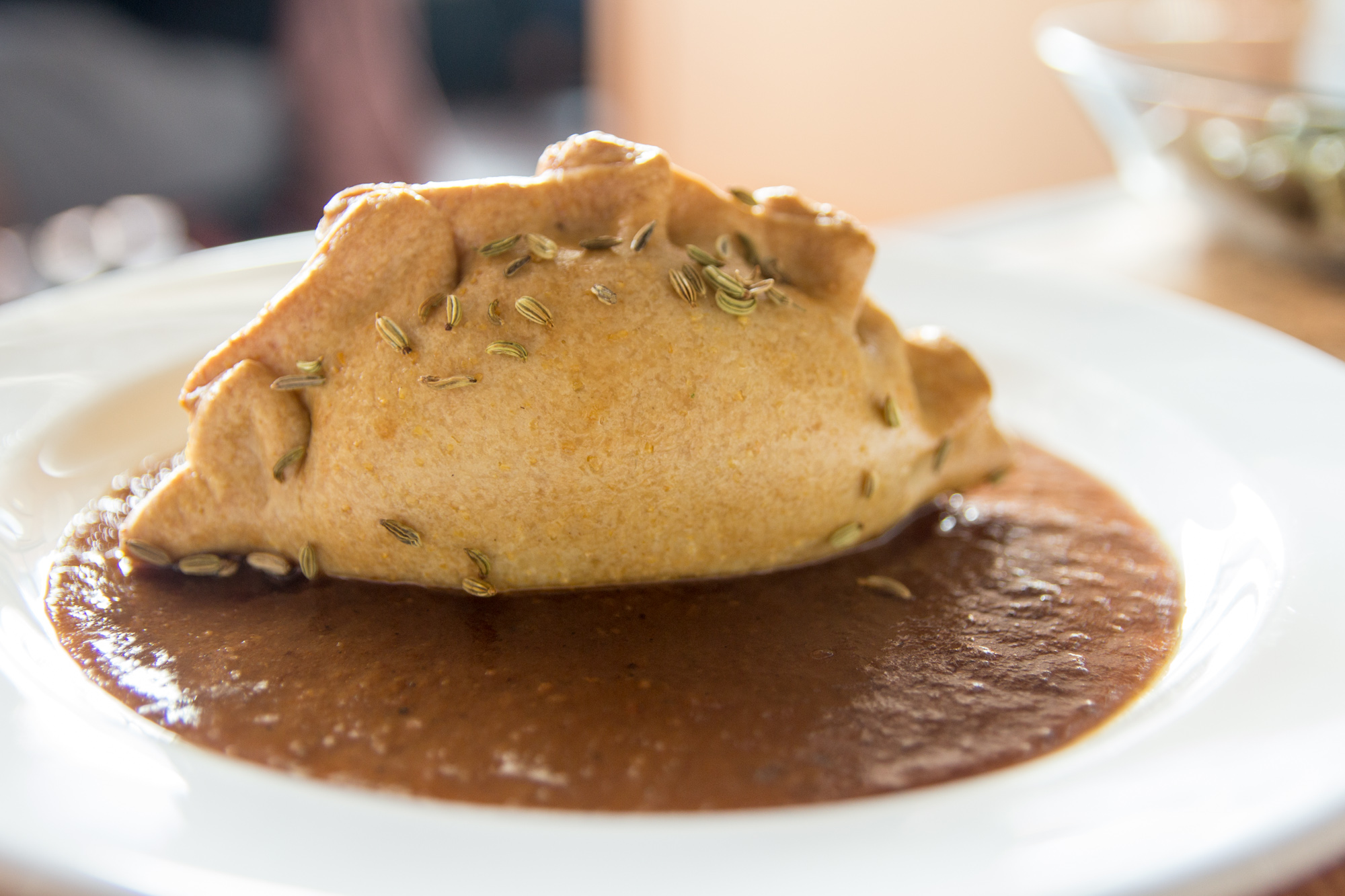 The fourth course, and what could most be regarded as a ‘main’ is chicken thighs and chard leaves, resting on a silky sweetcorn puree (the sweetcorn is sourced from James Foskett Farms). The whole thing is prepared and cooked wonderfully, as is the clear highlight of the meal, the ‘madrasty’, our fifth and final savoury course. A conflation of madras and pasty, it’s the greatest pastry-based foodstuff you’ll find in Manchester right now – and yes, much like the Greatest Manchester borough restrictions, we’re including Wigan in that. The madrasty is made with a beautiful, buttery pastry, speckled with fennel seeds, sealed up around slow-braised, tender beef, with the whole work of culinary art resting on a smart, hot madras-tinged oxtail gravy. 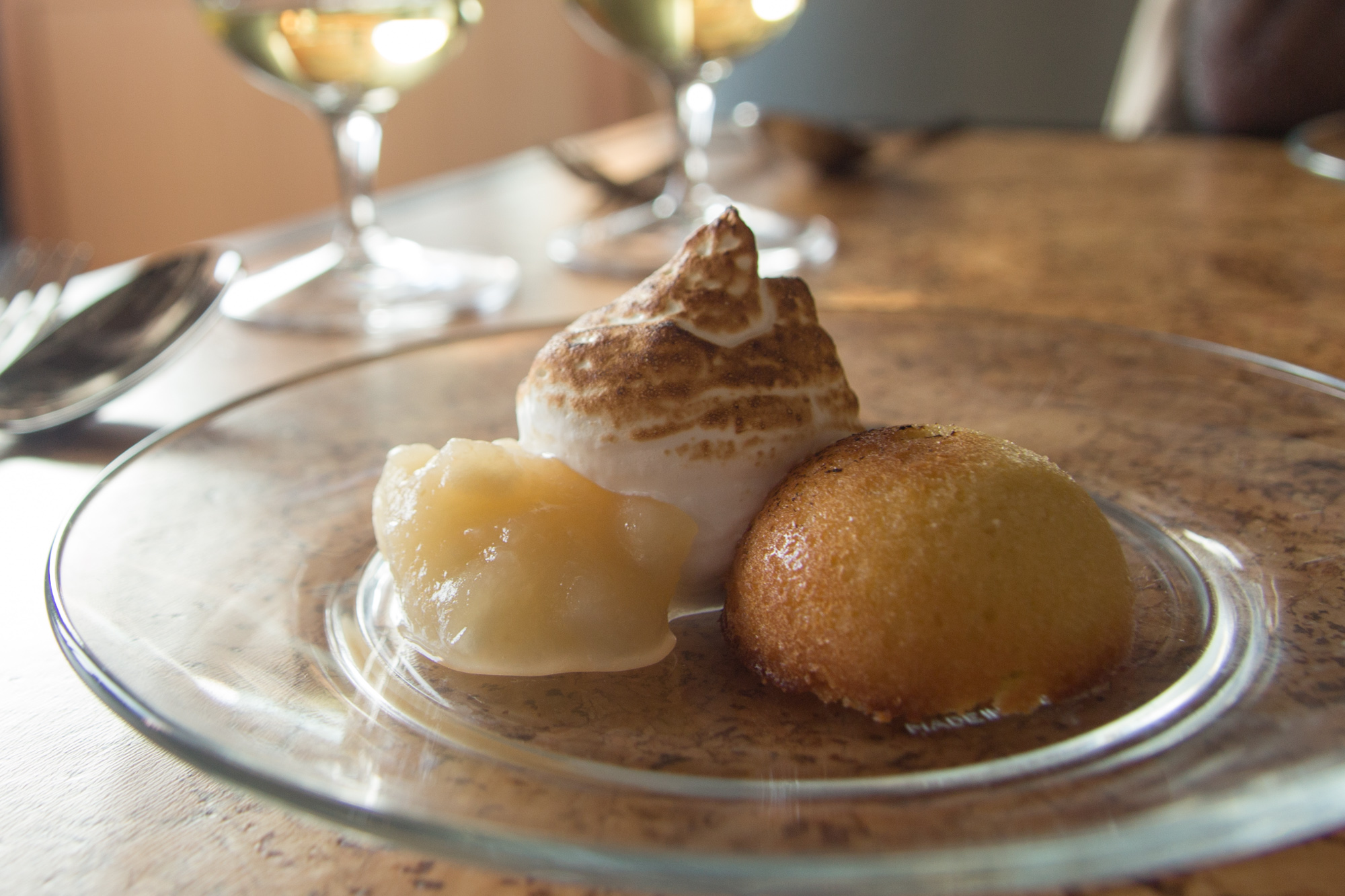 For dessert, a trio of sweet stuff. A dollop of burnt English apple; a delicate almond sponge; and a mound of soft, creamy meringue, lightly singed at the top. It’s a fine way to end a masterful meal, and if the Higher Ground team maintain this standard over the coming seasons, they’ll become one of the city’s leading destinations for repeat meals. In my original review, in the first flurry of lockdown mana, I said if I had to save one restaurant, Titanic-lifeboat style, it’d be this. That still stands.

Tasting Menus in The North

Looking for the finest luxury multi-course restaurants in Manchester? Look no further. We’ve picked out the very best tasting menus in the city – just make sure you have deep pockets.

Want more?
Get it in your
inbox
Load more
Exhibitions Until 3 July 2022, FREE