Following two years of painstaking renovation work, the Manchester Jewish Museum in Cheetham Hill reopens this summer, and to mark the occasion it is preparing to present the world premiere of a major new installation by Turner Prize-winning artist Laure Prouvost. Jointly commissioned in partnership with Manchester International Festival, The long waited, weighted gathering is an immersive installation that responds to the museum’s rich history as a former Spanish and Portuguese synagogue built in 1874 and will be presented within its breath-taking Grade II listed synagogue. 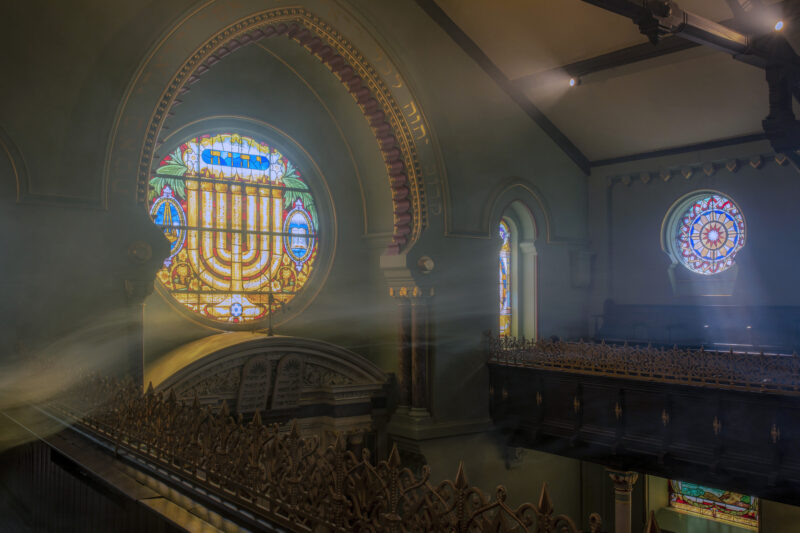 The piece centres around a new moving-image work that will play in 15-minute cycles on a screen suspended from the synagogue’s high ceiling. The film is inspired by stories from the museum’s oral history collection which capture the lives and experiences of the women who used to sit up in the Ladies’ Galleries – where tradition and religion dictated they positioned themselves during services, away from the men. Continuing the theme of playful and alternative perspectives that threads throughout Prouvost’s work, an abundance of bird imagery will symbolise the ‘bird’s eye’ perspective that the women had from this vantage point, whilst also celebrating the chatter, gossip and connection that filled this women-only space. The film has been made in collaboration with local Sephardi women, whose family members were amongst some of the synagogue’s former congregants.

To accompany the work, Prouvost commissioned a series of new artworks by the museum’s resident Women’s Textile Group – a collective of women of different ages, religions and cultural backgrounds, reflecting the diversity of the Cheetham Hill area. Among these, a mannequin-worn dress will explore the women’s identities and hopes for the future, while a series of embroidered panels will border the screen on which Provoust’s film plays, echoing its imagery of fruit and avian creatures and evoking the memories of some of the first Sephardic families to frequent the synagogue.

This is a fantastic opportunity to experience Prouvost’s work, visit the newly restored and extended museum, and learn about its unique history.

Read our guide
Want more?
Get it in your
inbox
Load more
Event venue

Connect
with us on
Facebook
Literature Until 20 July 2022, FREE