Running from 27 August to 5 September, the new festival features a packed programme of live music events hosted on an outdoor stage. Opening the Saturday night is the world’s premier Beatles tribute band, The Bootleg Beatles, whose 4000 shows have seen the quartet finesse their recreation of the Fab Four’s live performances. Expect a fun-loving set spanning the greatest songbook of all time.

Folk supergroup Show of Hands are up next on 29 August. Steve Knightley and Phil Beer — stars of the folk, roots and acoustic scene — will be joined by long-term collaborator Miranda Sykes and master percussionist Cormac Byrne for a set of new songs and sounds. The following evening, The Magic of Motown – one of the biggest success stories in British theatre history – comes to Burrs Live for a trip down memory lane, taking in the sounds of Marvin Gaye, Diana Ross, Stevie Wonder, The Temptations, The Supremes, The Four Tops, Martha Reeves, The Jackson 5 and Smokey Robinson. 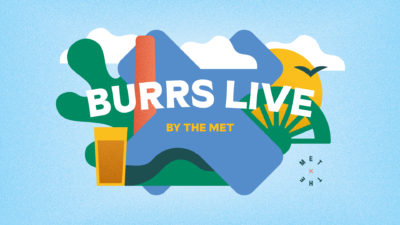 There are also two festivals to look forward to as part of the Burrs Live programme: Head For The Hills, which returns to Bury for the first time since 2018, and Happy Festival, inspired by the work of Bury-born star of stage and screen, Victoria Wood. Headlining the former festival is Badley Drawn Boy and Everything Everything, and at the latter you can watch Manchester comedian Rachel Fairburn, Victoria Wood’s long-time collaborator Sue Devaney with a set of songs and chatter, and the much-loved Brighouse & Rastrick Brass Band.

In addition to all of this, there will be a number of community events and workshops from the likes of Walk The Plank and Lancashire Wildlife Trust, suitable for all ages. And while you’re soaking up the summer festival atmosphere, you can work your way through a great selection of drinks from Radcliffe-based Brightside Brewery, who’ll be serving up everything from traditional real ale to experimental craft beer. There will also be a host of local food vendors, providing artisan delights to suit every taste.

A great new addition to Bury, Burrs Live promises to be a slice of joy for all the family. With more events to be unveiled as part of the programme, keep your eye on The Met’s website (accessible via the button below) for the latest word.

Read our guide
Connect
with us on
Facebook
Load more
Gallery