You might remember Nell’s Pizza from the bizarre standoff with police over the ‘substantial’ nature of a pizza slice during lockdown – the one where we weren’t allowed a pint without a pub lunch. Or, you may have simply heard great things about their huge 22-inch pies. Taking inspiration from across the pond, the New York-style slabs are thin and fully loaded, with a focus on ingredients from local suppliers, such as the Crafty Cheesemen and Littlewoods Butchers.

The family-run business is operated by husband-and-wife dream team, Jonny and Charlotte Heyes, who derived the name Nell’s from their kids’ initials. First launched in the kitchen of popular Northern Quarter haunt Common, you can now also try the stateside slices at The Beagle in Chorlton, and the Kampus development near Manchester’s Gay Village. 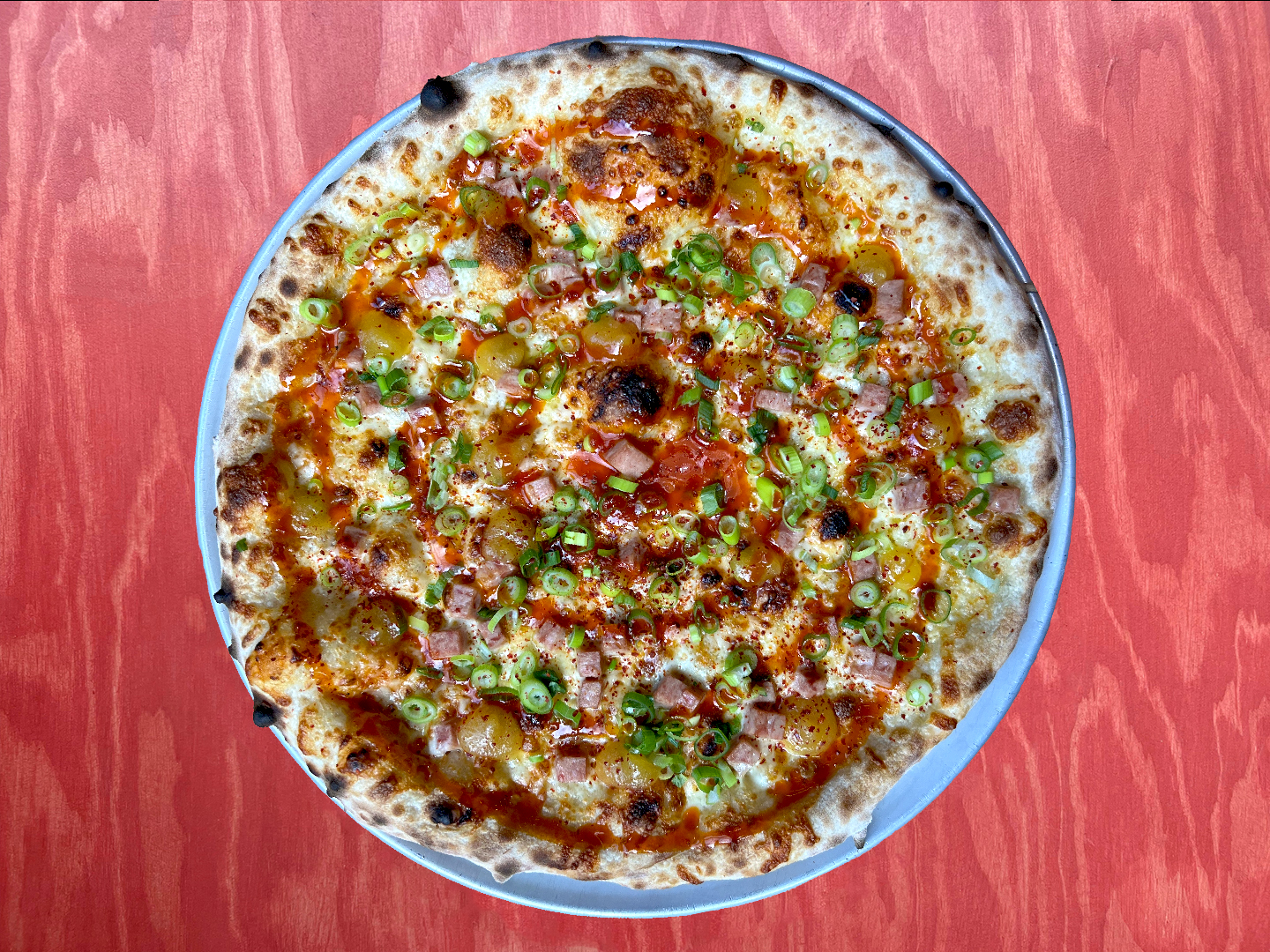 Marketed as a ‘garden neighbourhood,’ Kampus is a contemporary apartment complex with a canal-side courtyard packed with independent food and drink spots. As part of the eclectic community, Nell’s is rubbing shoulders with the likes of the legendary Cloudwater Brewery, Pollen Bakery and newcomers such as Madre and Yum Cha. On a Tuesday night, the atmosphere is still electric, with a laidback soundtrack and margaritas being served left, right and centre at the bar.

We popped down to try the latest in an impressive line of monthly specials, each one offering a creative twist on familiar flavours. Hot on the heels of last month’s McDoughNell’s, a vegan homage to the bold Big Mac, the Honolulu Heatwave promises to bring a new wave of controversy for pizza purists everywhere. Drawing inspiration from the iconic Hawaiian, this pizza features a medley of Tabasco sauces, smoked Lancashire cheese and a zingy pineapple jam. It’s topped with crispy chunks of Spam – and yes, we do mean the processed wartime delicacy.

A medley of Tabasco sauces, smoked Lancashire cheese and a zingy pineapple jam

As someone whose stomach is easily turned by anything sweet, I was apprehensive about the combination of pork and pineapple but, as always, willing to be convinced otherwise. We ordered Aperol Spritz from the Happy Hour cocktail menu – the ideal accompaniment to any Mediterranean meal. For our second pizza, we chose the popular Cheese and Onion pie, safe in the knowledge that those familiar flavours would balance out any misadventure with the Honolulu Heatwave.

When the 14-inch pies arrived, it was quickly clear that Nell’s is onto a winner once again. The sweet of the pineapple balanced elegantly with the tang of Tabasco and the salt from the Spam to the point that it became surprisingly moreish. The textures were there too, with the added crunch of fresh spring onion and the jammy consistency of the pineapple toning down the often-overpowering ingredient.

Since the Tabasco blends on the pizza are the milder Sriracha and Sweet and Spicy, it initially lacked that fiery kick you’d expect from a dish that has “heatwave” in the title. Fear not – the special is accompanied by a free mini bottle of the OG Tabasco, and this needs to be drenched on every slice for the full fiery experience. As expected, the Cheese and Onion Pie offered the perfect antidote to the onslaught of flavours, with its blistered crust, soft onions and creamy cheese.

While I might not be fully converted to meat from a tin, I’d certainly return for a slice or two of the Honolulu Heatwave – it’s Nell’s last special of the year and available until 20th November.

Food and Drink in the North East

Our guide to food and drink in the North East of England, featuring restaurants and bars in Newcastle, Durham and Sunderland.