Sad news for the Manchester food scene recently. No, not the wife of a City footballer saying it’s “horrible” (she’s merely been going to the wrong places; the kneejerk reaction from the online outrage merchants was more embarrassing). No, we refer to the closure of District, one of the most forward-thinking places we’ve eaten in recent years.

District was no ordinary restaurant

As a final flourish, the team held a final week of dining for fans to raise a cocktail in celebration. It’s not often we cover a restaurant closing, but District was no ordinary restaurant. Small glimmer of hope: we have it on good authority that it isn’t disappearing but coming back with a stronger bar-style focus on late-night drinks, and smaller food menu.

Either way, it seems unlikely that chef-owner Ben Humphreys will move away from food, not when he’s spent the past couple of years creating some of the most memorable dishes in the North-West. 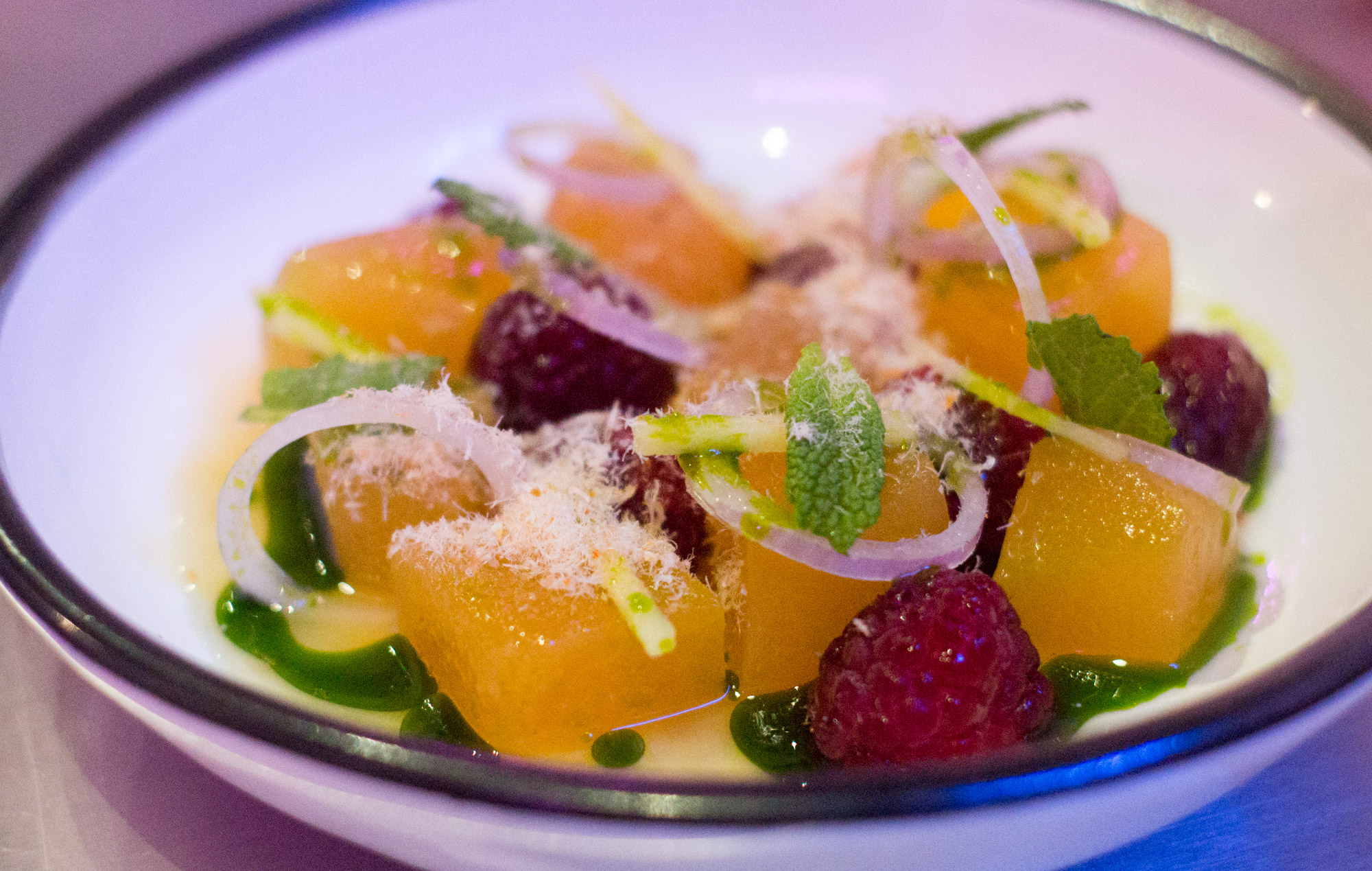 The yam ponlamai is a perfect example. Basically a fruit salad from the future, it’s a bowl of powerful flavours: ginger, peach, pear, lemongrass, and the mysteriously titled ‘shrimp floss’, which appears to be dehydrated shrimp, ground to a fine powder. It’s a fresh and unusual start to the meal that dances between sweet and savoury. 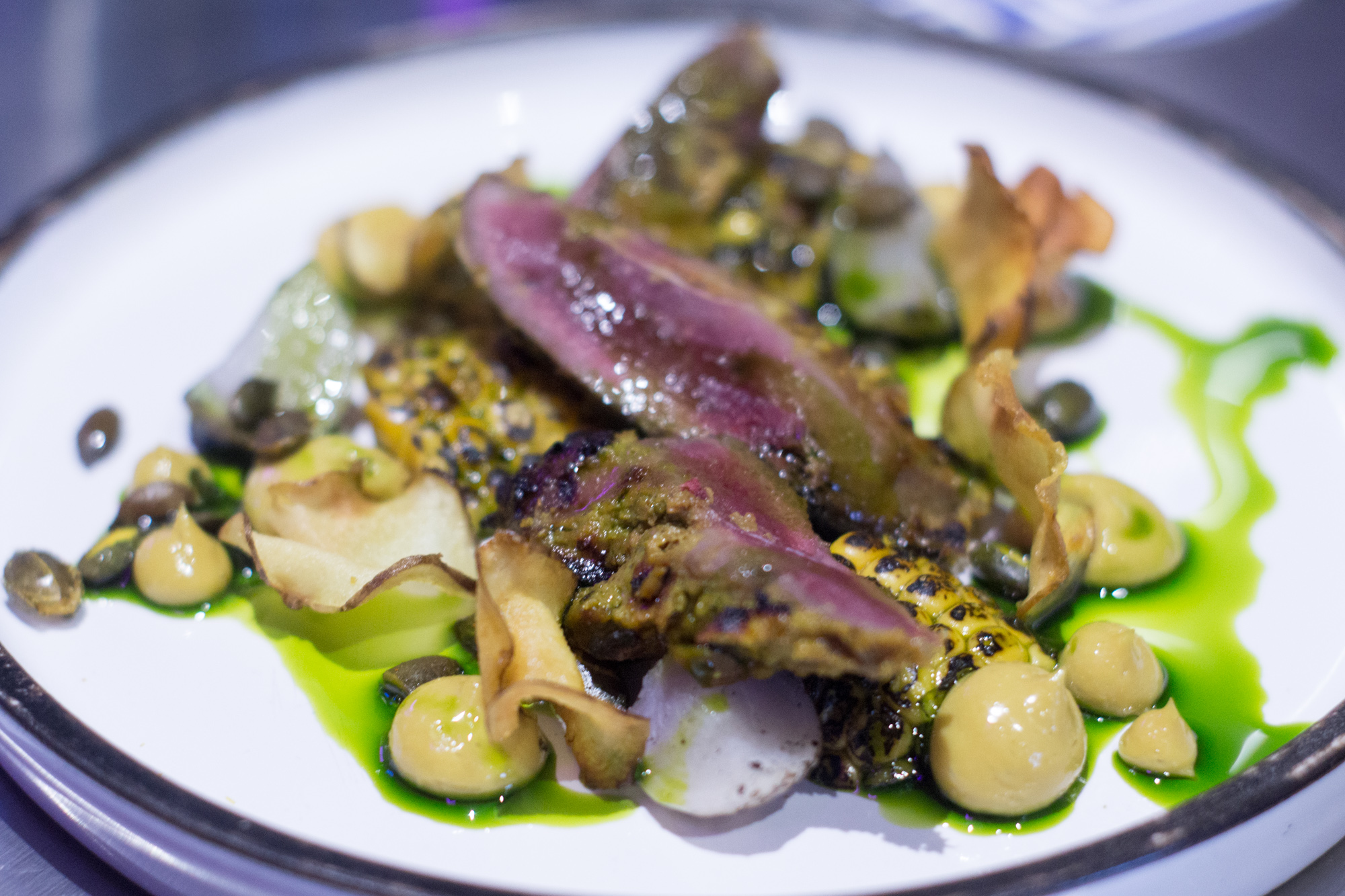 Then there’s the pigeon satay. A well-deserved staple of the District menu in recent months, it’s a wild-looking dish, full of swirling lurid colours and flavours, surrounding some delicate pieces of meat. 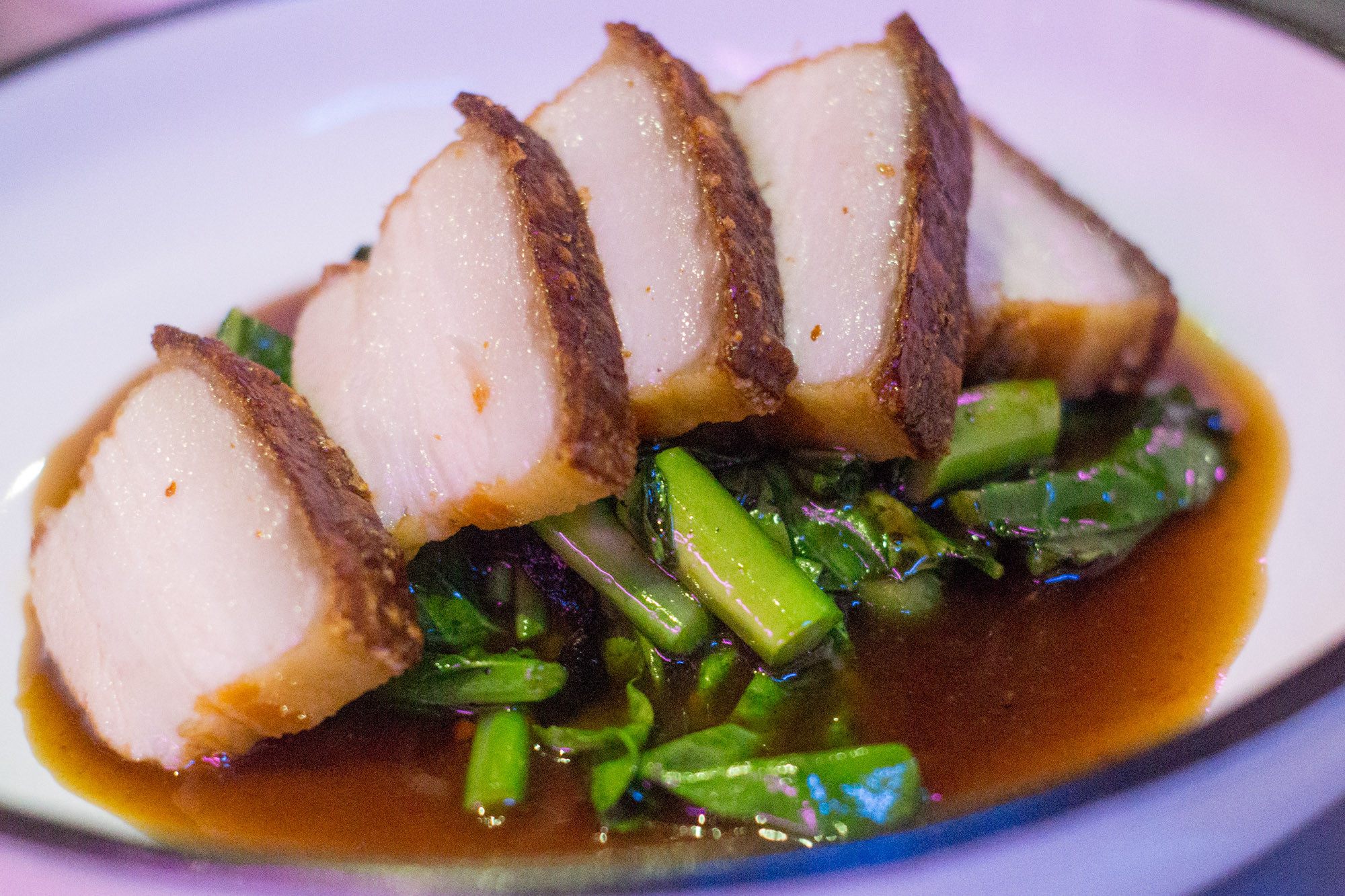 Another classic is the Kurobuta Berkshire pork belly. It’s a magical cut, cooked and prepared in multiple different ways, including at least two steamings. This results in incredibly soft slices of pork, topped with a fiercely hard centimetre-thick strip of crunchy crackling, all lying in a garlic-heavy sauce with some kana (cooked greens similar to kale). 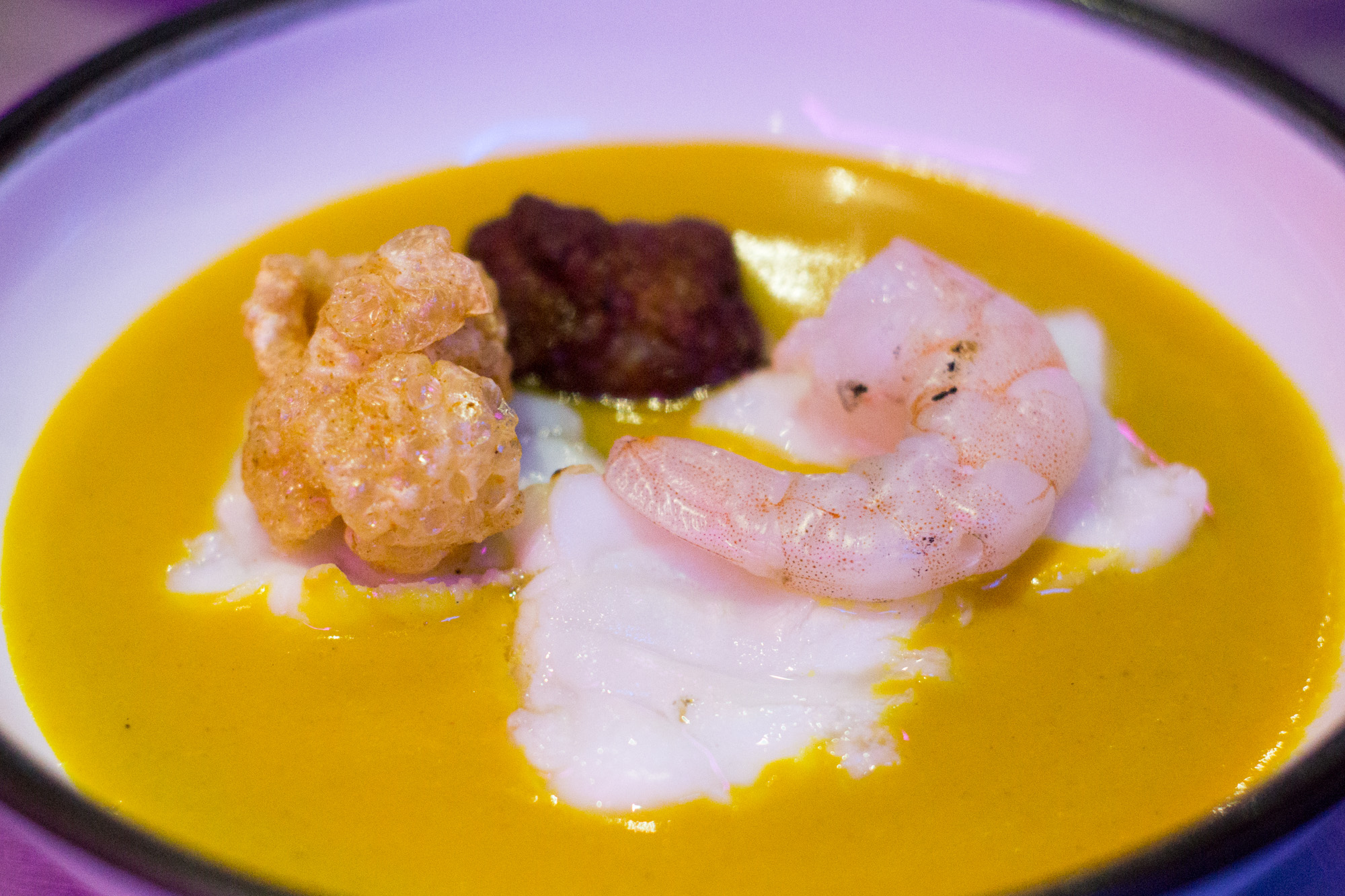 The monkfish yellow curry is a newer addition, and it’ll be a shame not to try this again. Here you’re treated to a piece of puffed-up pork, monkfish, a scallop dumpling and a big pink tiger prawn, all nestling in a pool of fiery hot and creamy yellow curry. It’s a fantastic take on Thai curry. 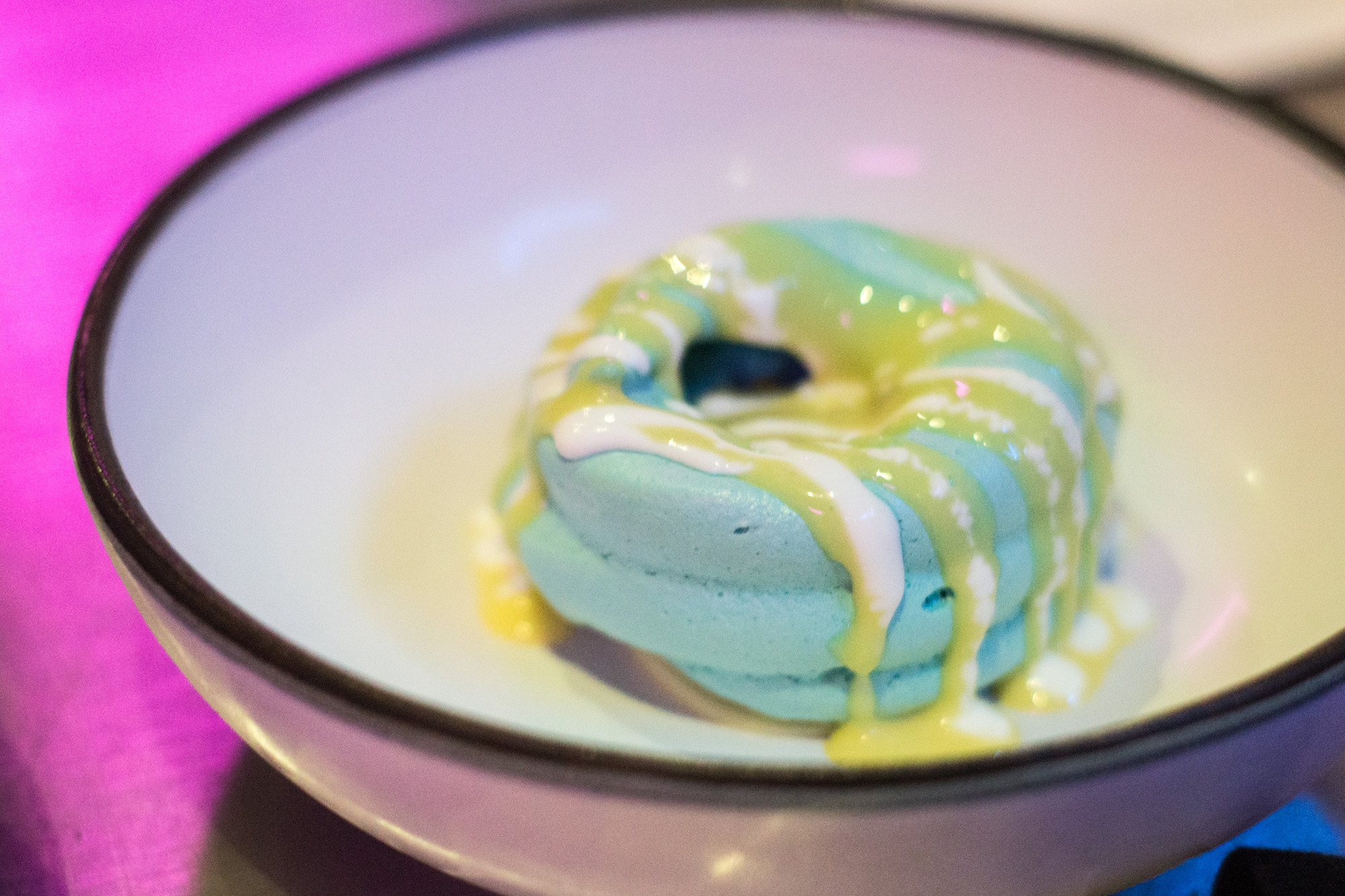 But the iced coconut caramel takes the prize for best sweet. It’s a soft cube of mango and coconut, blessed with a touch of turmeric, then topped with some rice praline to make the ultimate combination of texture and flavour. It’s far from the largest dish on the menu, but it’s certainly one of the most memorable. 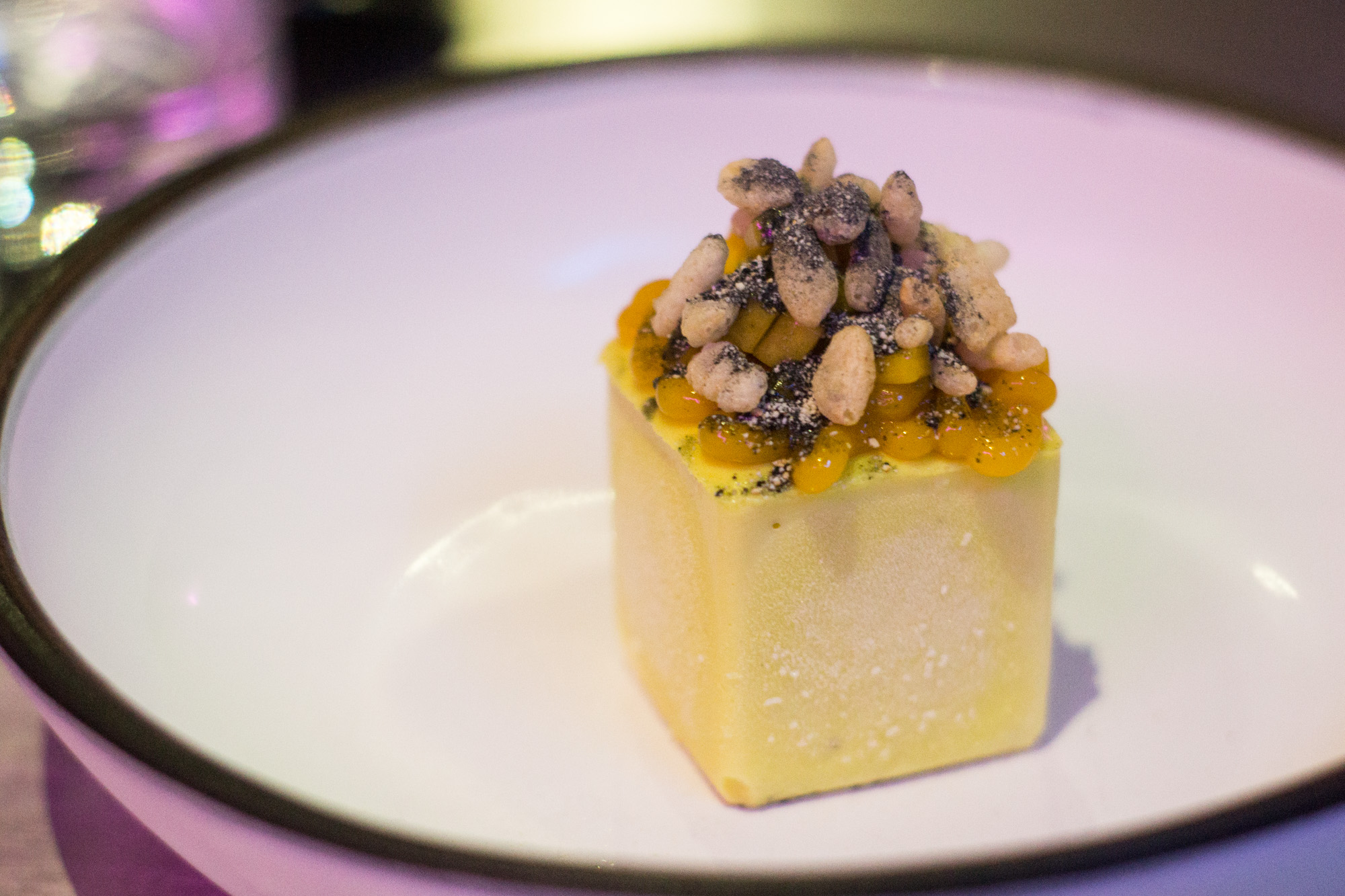 It’ll be a long time before a restaurant as unique and exciting as District comes along again. It had the spirit of pre-housing developer Manchester in spades: futuristic and overflowing with ideas, with tongue-in-cheek execution. Whatever happens next, Ben and his team are nailed-on to do great things in the city’s food and drink world. Premiership footballers & co take note.

Food and Drink in Altrincham

Altrincham’s food and drink scene is among the best in the North. Whether you’re looking for stylish restaurants or cosy independent coffee shops, this beautiful town has the lot.