Sounds From The Other City

Since its first outing in 2004, Sounds From The Other City has grown to be one of the country’s foremost festivals showcasing new and emerging talent. Sprawling across pubs, churches and community corners of Salford for one sweet, sweet day each year, the festival champions local promoters, spotlights pioneering new artists and celebrates the other city’s off-kilter charm. Following forced cancellations in 2020 and 2021, SFTOC has announced its hotly anticipated return with a compelling 2022 edition on May Day Bank Holiday, Sunday 1 May. The 2022 event is set to recapture the true, sweat-drenched, hands-on DIY SFTOC spirit, and will take place throughout the festival’s spiritual home of Chapel Street. 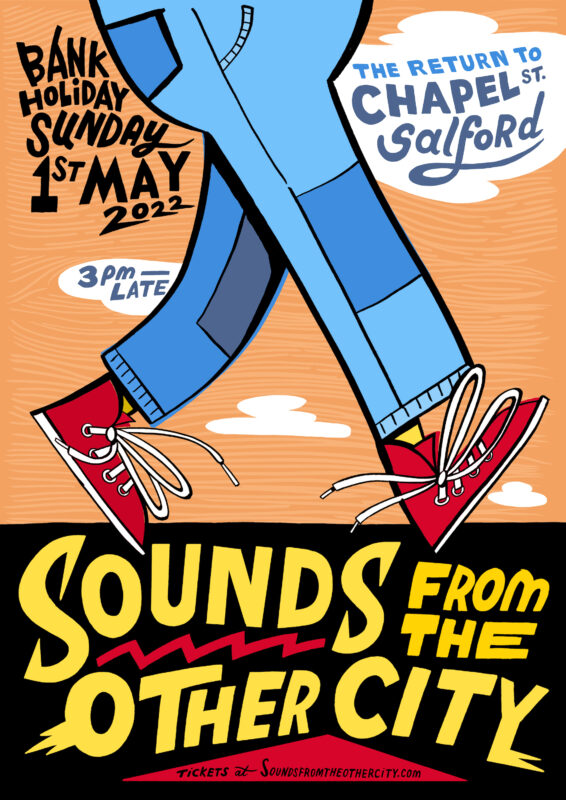 Included in the list of artists announced so far is Modern Nature, who’ll be serving up a melting pot of bucolic folk, experimental jazz and psych-tinged indie rock. Their debut album How To Live sounds like Beak> via Radiohead circa In Rainbows, while their recent sophomore, Island of Noise adds some deliciously eerie free jazz to the mix. Joining them on the bill is one of Manchester’s most exciting new bands, Mandy, Indiana, who mix coarse industrialism, squalling feedback and contorted electronics.

Also from Manchester, LayFullstop will be blending jazz, soul and hip-hop; glue70 will be serving up bass-heavy beats with punchy, energetic drums and potent melodies; and producer Holy Other will be showcasing his otherworldly take on R&B, UK Garage and House. 2021’s Lieve marked Holy Other’s first LP since 2012, and his set is one a lot of people will be excited about. The same goes for Wesley Gonzalez, whose two critically-lauded solo albums showcase undeniable pop smarts and rich, mid-70s soul production.

A big highlight for us is freakpop duo, Audiobooks. Their latest album, Astro Tough, is a trip into the singular minds of its creators, David Wrench and Evangeline Ling, whose chaotic energy and… well… weirdness is totally captivating, especially live. From unsettling, clubby bangers about little girls losing dolls to full-blown hedonistic pop songs that chart the stages of unhinged nights out, their tunes sound like no-one else’s. An acoustic set by Katy J Pearson is another winner; expect good ol’ fashioned country heartache to the left and effortless pop hooks to the right.

If contemporary hip-hop’s your thing, check out Nayana Iz. Born in London, made in India, the artist is a culture-clashing force to be reckoned with. And there are a few spoken word standouts, too, the first being Isaiah Hull. Inspired by writers as diverse as Saul Williams, Philip Larkin and the Greek classics, Hull has supported artists such as Kae Tempest, Lemn Sissay and Skepta. And we’re also pretty intrigued to catch LYR (Land Yacht Regatta), the brainchild of UK Poet Laureate Simon Armitage and bandmates Patrick James Pearson and Richard Walters.

The festival will take place across some of Salford’s finest venues including Bexley Square, Seven Bro7hers Beerhouse, fivefourstudios, Hot Bed Press, Old Pint Pot, Partisan, Porta, Regent Trading Estate, Saint Philip’s Church and The New Oxford while, ahead of its opening next year, The Factory, a landmark new cultural space operated by Manchester International Festival, will present a stage of up-and-coming artists.

Riv Burns, Creative Director for Sounds from the Other City, comments: “Coming back from two years without a festival was always going to be daunting. The support of our extended community from crowdfunders in 2020, through to purchasing tickets in the back end of 2021 with just a date announced, through to sheer enthusiasm from promoters and artists has been overwhelming and humbling. This first wave of artists is so unbelievably exciting and quintessentially SFTOC, I’m really proud and can’t wait to bring this AND MORE to Chapel Street and the surrounding area on Sunday 1 May. It really is shaping up to be a vintage year, full of magic, collaboration and new faces. One you don’t want to miss.”

Sounds from the Other City is a genuine DIY success story, with the prior seven festivals each having sold out. The festival has also housed early-day performances from artists as diverse as James Ferraro, Marina, Alt-J, Slowthai, Hannah Peel, GoGo Penguin right through to 2017’s Mercury Music Prize winner Sampha, BBC Sound of 2018 nominee IAMDDB and 2019 Mercury Music Prize nominees, Black Midi. As for the 2022 line-up, we’ve only covered a handful of the names on the packed bill; head to SFTOC’s website (via the ‘book now’ button below) for the full lowdown.

After two years without SFTOC, it’s great to see this jewel returned to the crown of Salford’s music scene.

Sounds From The Other City

Best places for yoga in Manchester: Places to get stretchy

From picturesque settings to pay-as-you-pose spaces, here’s our guide to the best yoga classes Manchester has to offer. Best places for yoga in Manchester: Places to get stretchy.

Cross over the River Irwell, and you’ll find yourself in another city entirely – Salford….

Read our guide
Connect
with us on
Facebook
Load more
Theatre

Crimes of the Future at HOME