We Out Here Online & On Air

Jazz fans rejoice – Manchester’s Reform Radio is partnering up with We Out Here festival for a virtual weekend party soundtracked by over 50 jazz/jazz-inspired artists, in aid of Black Lives Matter-associated charities.

Curated by Gilles Peterson, We Out Here festival celebrates the new wave of jazz acts behind the genre’s resurgence in recent years, while basking in the glory of some of the greats who inspired them.

Last year’s inaugural festival saw the likes of Gary Bartz, Joe Armon-Jones and Binker Golding descend on a sun-baked field in Cambridge. This year’s virtual edition will obviously be a bit different, but the organisers have gone all out to maintain the ethos and spirit of the festival, with a varied programme of anti-racist talks, films and activities running alongside the music.

Musical offerings come from around the globe, including a rare set from free jazz legends Sun Ra: Marshall Allen’s Cosmic Tones, who’ll be beaming in from their lockdown house in Philadelphia. From the new generation of London jazz acts, we’ll hear from Kokoroko and Moses Boyd, while Mark Flash of the techno collective Underground Resistance will be transmitting from Detroit. Representing the Manchester scene, meanwhile, will be Mr Scruff, DJ Paulette, Luke Unabomber and Children of Zeus.

There will also be a film programme courtesy of Doc’n Roll Cinema, whose focus will be on Black excellence and anti-racism in the music history. You can also listen to panel discussions from Brownswood Recordings, Stamp the Wax and Arts Allies, who will be exploring themes around music, culture and race. The weekend’s programme also caters for families, with kids activities, music workshops and an anti-racist reading time.

All proceeds raised over the weekend will be donated to support the resurgent Black Lives Matter movement – a selection of charities chosen by We Out Here’s partners and contributors that fight racial injustice and support Black culture. Donations will be split between People Dem, Tomorrow’s Warriors, Black Cultural Archives, Black Minds Matter, Abram Wilson Foundation and The Black Curriculum.

You can tune into the virtual festival via Gilles Peterson’s radio station Worldwide FM and Manchester’s Reform Radio, in addition to an online video stream via Mixcloud Live. 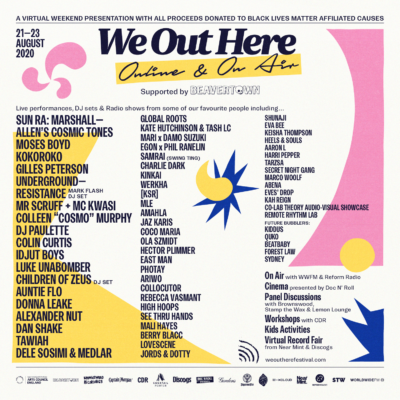 We Out Here Online & On Air, online